Peter and Paul Fortress was founded by Peter I in 1703. Besides the ancient fortifications, on the grounds of the fortress one can visit the Sts Peter and Paul Cathedral of the early XVII century (architect D.Trezzini) with the burial vault of Peter the Great and other Russian tsars, the museum in Trubetskoy bastion prison, expositions: "The History of St.Petersburg", "The History of the Imperial Mint", "Pechatnya" (Printing Workshop), museum on cosmonautics and missilery; excursion route "Panorama of the Neva" - over the roofs of the fortress' bastions and curtains. By booking beforehand, the collection of open furniture storage is available.
Open: 10:00 - 18:00
Closed on WED and on the last TUE of every month. 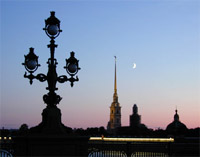 The Peter and Paul Fortress is the historical nucleus of Petersburg, military, engineering, architectural and historical complex. It was beginning of city building, and 16 (27) May 1703, when it was founded by order of Peter I in Zayachy (Hare) Island, is a birthday of the Northern Capital. Firstly the fortress was called the Saint-Petersburg, but there was another name - the Peter and Paul - name of the Peter and Paul Cathedral, located in the centre of the fortress. Since 1917 it was established as an official name. During the October Revolution the fortress became a special body of the Petrograd soviet, the Petrograd Military Revolutionary Committee directing the uprising and the storm of the Winter palace. The museum in the fortress was opened in1924, the main buildings became the properties of the Museum of history of Leningrad in 1956, and since 1993 The Peter and Paul Fortress became a historical and cultural complex. Six bastions of the fortress were named in honor of Peter I and his assistants, who personally directed the building - the Tsar, the Menshikov, the Golovin, the Zotov, the Trubetskoi and the Naryshkin. The united architectural ensemble includes: fortification system - fortress walls, curtains, bastions and ravelins 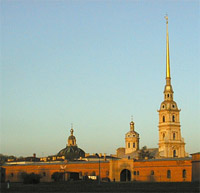 (1706-1740, the architect Dominique Tresini, the engineer Burhard Kristof von Minikh); the Parade Peter Gate (1717-1718, the architect Tresini), the Bathhouse (1762 -1766, the arch. Alexander Vist) where a copy of Peter's boat (the Grandfather of Russian Float) is stored; its original is now in Central Military and Navy Museum; designed by bas-relief "The Overthrow of Simon the Magi by Peter the apostle" by Conrad Osner; the Mint Works (1798 -1806, the architect Antonio Posto); the Engineer's house (1748-1749), the Commandant's house (1743-1746, the engineer de Marine) and others.
In the centre of the ensemble there is the Peter and Paul Cathedral (1712-33, the architect Tresini). Its bell-tower served as a city Clock tower. It became a symbol of establishment of a new capital of Russia on seaside lands. Topped by a golden tall-spire bell-tower stayed the highest (122,5m) architectural construction of Petersburg. The main decoration of the Cathedral interior is carved golden iconostasis of the in a Baroque style made by Moscow carved on wood by design of Tresini and Ivan Zaprudny.
The cathedral was firstly used as a necropolis of the Romanov House. There are the remains of Russian Emperors from Peter I to Nikolai II and members of their families (excluding Peter II and Ioann IV). The Grand Ducal Burial Vault (1896-1908, the architects David Grimm, Anton Tomishko, Leonty Benois) where before the revolution 13 members of the Emperor family were buried. In 1992 in the Burial Vault the Great Duke Vladimir Kirillovich was buried (e died in emigration); in 1995 the remains of his parents - Kirill Vladimirovich and Victoria Fjodorovna - were brought from Koburg (Germany). 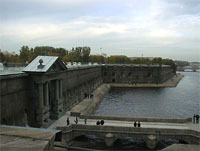 The Commandants' Cemetery is by the East Wall of the Peter and Paul Fortress, where 19 from 32 commandants of the fortress were buried. In 1991 not far from the Cathedral by the min alley the monument of Peter I, presented to the city by its author Mikhail Shemyakin was set up.
On the territory of the fortress there are the expositions of the Museum of the History of Saint Petersburg. The oldest one is placed in "former prison" of the Trubetskoi Bastion, built in 1870-72. Since Peter's reign the most important state criminals were sentenced to solitary confinement cells, later - to isolated cells of a Secret House of the Alexeevsky ravelin. The prisoners of "Russian Bastilia" were: the son of Peter I - Tcarevich Alexey, Artemy Volynsky, Tadeush Kostjushko, the participants of the Freedom movement, Alexander Radichshev, Decembrists, Petrashevs, Fjodor Dostoevsky, Mikhail Bakunin, Nikolai Chernyshevsky, Peter Kropotkin, Maxim Gorky, members of "The People's Will", members of Social Revolutionary Group, Bolsheviks… After the February Revolution the Tsar ministers were sentenced into prison of the Trubetskoi Bastion, and in the night on 26 October 1917 - the members of the Temporary Government. During the Civil War there were sacrifices of "red terror, the members of Kronstadt uprising in 1921. The exposition firstly opened in the prison in 1924, tells about its building, regime and several generations of prisoners.

In former Commandant's House since 1975 the exposition "The History of Saint-Petersburg" was opened. Nowadays it presents the past of by - Neva territories from ancient times to the foundation of Petersburg in 1703 and about the history of the city until the mid - 19th century. In the Engineer's House there are various exhibitions from the richest museum funds. In the Ioann ravelin room there is a museum of Gasodynamic Laboratory, devoted to the development of national rocket building and astronautics. There in 30's there was the first in the USSR experimental and gasodynamical laboratory on constructive design of rocket engines. The exposition tells about the founders of astronautics - Konstantin Tsiolkovsky, Nikolay Zhukovsky, Sergei Koroljov, and many others. The rooms and some workshops where the constructors worked under the direction of the founder of national rocket engine building Victor Glushko, were restored. In the museum you can see a trigger mechanism of a spaceship "Sojuz-16", the models of the samples of rocket and space technique, the original equipment and garments of cosmonauts - protective suits, heat-proof suits, photos of surfaces of Moon, Venus, Mars, Saturn, made by cosmonauts, also the document and materials about the experiments of rocket engines and starts of the first rockets.
Every year there is a cannon shot at midday from the Naryshkin Bastion and every year the Peter and Paul Fortress becomes the place of celebrating of the Day of the City - on 27 May.